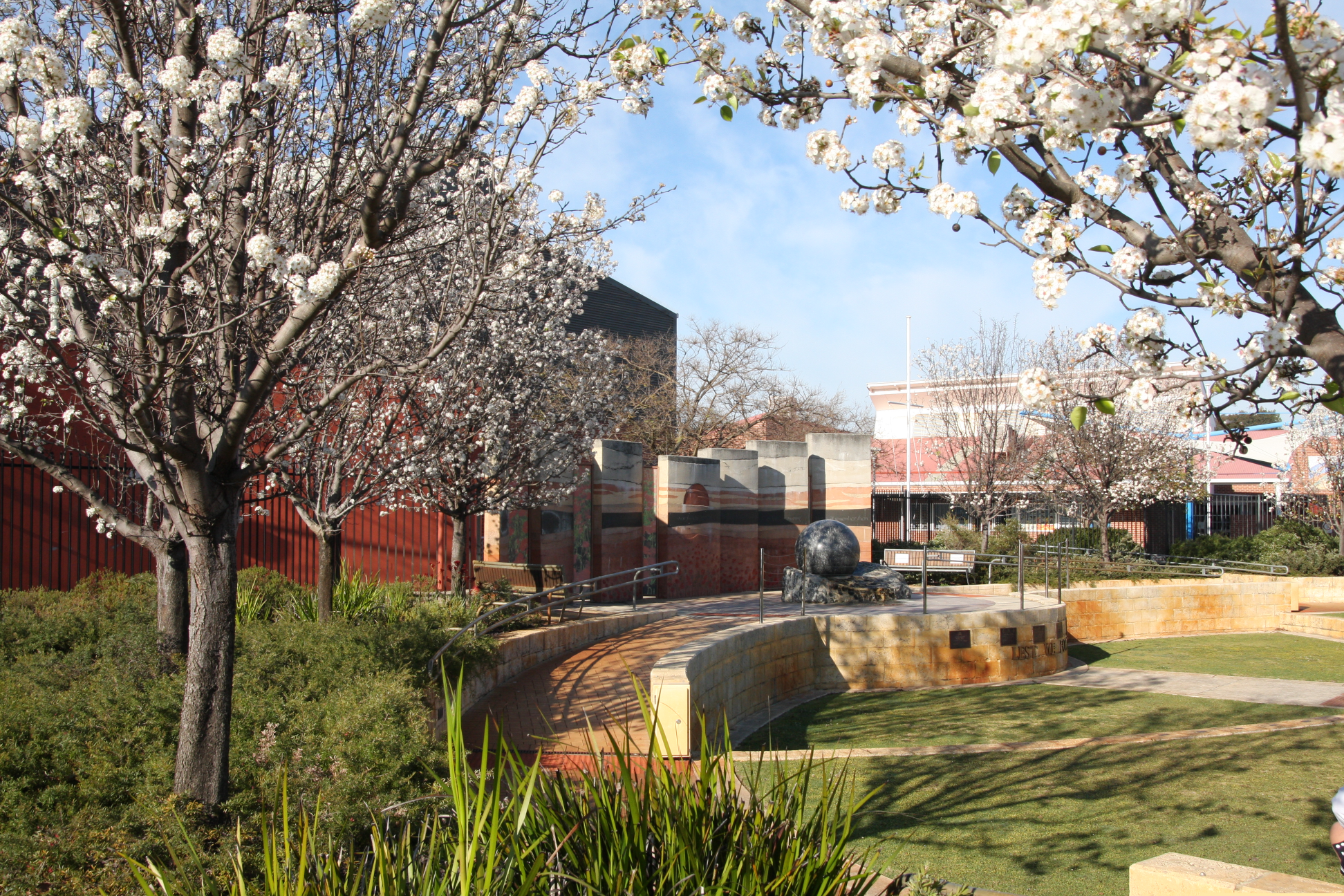 To act as a permanent reminder of the sacrifices and commitment of service men and women it was decided to create a War memorial and Peace Park within the grounds of the College. The Ballajura Memorial Peace Park was the brainchild of a number of key people from the Ballajura community, who, after attending an Anzac Day ceremony at Ballajura Community College in 2003, lamented that Ballajura did not have its own war memorial for such important community events.

Prior to the creation of the Ballajura War memorial and Peace Park Anzac Day services involving the College’s 2000 students and 250 plus staff; many parents and local dignitaries were held in the College’s gymnasium.  The ceremonies were always dignified and respectful but many agreed that Ballajura needed a specific site for such events that welcomed all members of the Ballajura community, whether they had children attending the College or not. It was also agreed that this site should encourage rest and reflection in memory. Out of this vision has been created the Ballajura College’s War Memorial and Peace Park.

The key feature of the Ballajura Memorial Peace Park is that it is a significant community resource and one that enables the community to reinforce its values of citizenship and endeavour.

The project was developed as a partnership actively involving the WA State and Federal Governments, the City of Swan, the RSL Association of WA, the Ballajura Community College and the wider community. The project brought together many local organisations such as the Scouts, District Cadet Units, RSL, Legacy, Senior Citizens and Veterans groups, who all offered their support for it.

As a consequence of this project a very strong alliance has been formed with the local sub branch of the RSL to the extent to which it now uses College facilities as its headquarters. The branch members hold their meetings at the College and further use the College facilities as required. Students benefit from the continued contact with veterans and relationships formed have enhanced understanding of the commitment and values associated with service to country.

This project has proven effective in bringing people together, establishing pride with understanding within the community, regardless of gender, colour or creed. It has proven to be effective in continuing Australian values of remembrance, patriotism and community and individual pride.

The real benefit of this project is that it has put a heart into the Ballajura Community.

A highlight of this project was the truly humbling and moving dedication ceremony that was held at the Ballajura War Memorial and Peace Park on Wednesday 3rd May 2006, which coincided with the traditional BCC Anzac Service, attended by the numerous people involved in the Park’s inception, as well as the entire student body of BCC, staff, parents and members of the local community.

This humble beginning has provided the foundation for the development of the BCC ANZAC Ceremony.

A dawn service is conducted on ANZAC Day in the Ballajura War Memorial and Peace Park. This is  a precursor to the College’s own service.  In 2008 the service attracted over 400 people and today, attracts over 2000.  Students from the College’s Police Ranger Unit play a significant role in the ceremony which received praise for its solemnity. The dawn service is followed by a Diggers’ Breakfast sponsored by the Ballajura Branch of the RSL and held in the College’s main staffroom facility. Over two hundred visitors joined for the ‘Diggers’ Breakfast’ following the Dawn Service in 2008 and numbers have grown to over 500.

The College has initiated a program in 2008 to coincide with its ANZAC commemoration to honour those who have served in the armed forces in any theatre of War. Stainless steel tags are inscribed with each individual’s service details and mounted on the wall for students to review and appreciate. This then becomes a permanent reminder for all of the service of others in defence of their community. 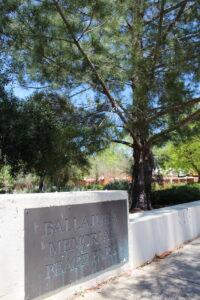 The 2008 ANZAC Service was well attended by all 1943 students, 235 staff, district veterans, politicians, city officials and parents. It was a very formal ceremony hosted by the College Captains and involving many student groups in its staging and delivery. The Ballajura Police Rangers respectfully provided the guards of honour, the Flag raising and organised the wreath laying ceremony. The School Band and Choir with students from Year 7 to Year 12 led the National Anthem and solemnly played music throughout the service. A Year 11 bugler played the Last Post and Reveille.

The service was preceded by a district march past involving the Western Australian Police Pipe Band, Veterans, Student Councillors, the Police Rangers, and Year 9 Custodians of the Peace Park. Students assisted in carrying the RSL banner. Enroute, the Year 7 cohort of 350 students lined the street to wave flags and acknowledge the marchers prior to joining the school community for the ANZAC Service. Their responses to the marchers reflected an understanding of the observance of the ANZAC tradition.

After an official welcome and keynote address a variety of students researched and wrote perspectives on the ANZAC spirit and its meaning in today’s society. These were then presented to those assembled in the very solemn commemorative service. Their presentations were immediately followed by a poetry recital by a service veteran.

Following the ceremony the official party, members of the local RSL, and senior citizens that volunteer their services at the College were entertained at a morning tea that had been prepared and served by students.  Traditional ANZAC biscuits were popular with the guests.

This ANZAC Service was the start of one of the highlights on the College calendar each year. 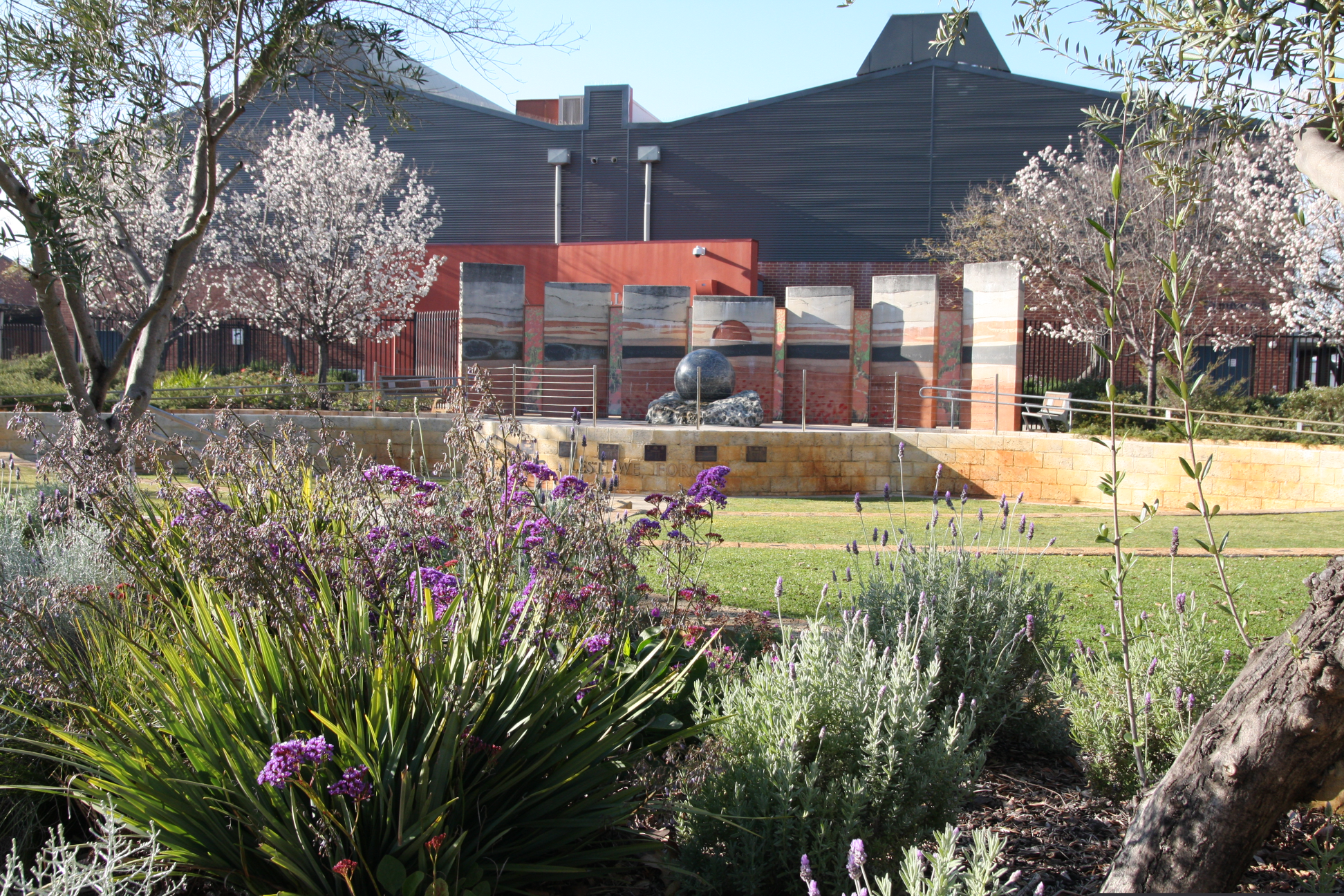 The Ballajura Memorial Peace Park is both contemporary and innovative in its design. The contemporary design compliments its location on the grounds of Ballajura Community College on Illawarra Crescent. BCC’s design is modern, reflecting the innovative and cutting edge attitude of the staff and administration team. The War Memorial and Peace Park has been designed along a central axis. The focal point of the axis is the War Memorial with rammed earth memorial panels and a granite water sphere. The podium has been created to host ceremonial occasions and provide the speaker or conductor of a ceremony an appropriate elevated platform. The grassed terraces in front act as an auditorium or assembly area. The olive tree avenue and circular lawn at the Illawarra Crescent end of the axis comprise the Peace Park. The park around the circular lawn includes small scale intimate spaces for everyday use by student groups in break times or in open air classes, by community groups and individuals so that they may simply rest quietly and enjoy the space or reflect on their memories and emotions.

The Park was created by people with vision, leaders within the community, who recognise our history and were committed to creating a future, together. Their commitment to this concept was strong; their beliefs in this concept were strong, as was their belief in the staff and students of Ballajura Community College. These leaders knew it was achievable and with strong student engagement and involvement were able to bring the park into fruition.

In 2008 the Ballajura Community College school community wanted to extend the ANZAC link from the Middle School Peace Park to the Senior School campus and an invitation was issued for artistic submissions. The ANZAC Ribbons project began as a vision by artist in residence Gregory White, supported by the RSL and the Central Institute of Technology.

A number of senior history students worked collaboratively with the artist to determine a focus and vision for the ribbons. Students worked in their own time during lunch breaks and at home to research biographies of service men and women from the local community. Students interviewed family members and veterans, researched online databases and searched old newspapers to gather information. The Ballajura Sub-branch of the RSL, with approximately 65 members, most of them Vietnam veterans, was a rich source of information and support.

The four ribbons are soaring glass panels representing campaign ribbons of servicemen from four major conflicts, the First World War, the Second World War and the Vietnam and East Timor conflicts. Stories and photographs are embedded in the panels. Also included is information about a former student who died on active service in the Solomon Islands.

“We have all contributed to the ANZAC Ribbons and they all mean something different to each of us. My grandfather, Clifford William Pendegrast, fought in Borneo in the 2/43rd Battalion. These ribbons to me mean that I have now officially attained something that I was looking for. I never met him, so I have always thought I had to be my best for him to be proud of me. The ribbons represent a stage in my life for me to be proud of myself and to do it with, and about, my grandfather was a blessing”. Sarah Pendegrast, Year 11. 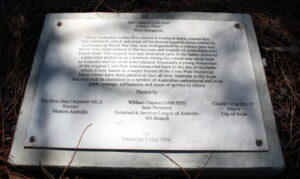 Once the research was completed, three  digital design students, with the help of their teacher, spent many hours preparing a digital copy of the information ready for it to be cast in glass in Melbourne. A teacher from the Design and Technology team constructed a limestone cairn that holds plaques commemorating the unveiling event on 30 April 2009 by the Minister for Education following the College’s ANZAC service, and the names of students and staff who contributed to the project.